To start, I swear I’m not trolling Dynamic Ecology – this post was in the que for a while. Having said that…

Up Goer Five. If you’re not familiar with it, it was (is) an exercise to explain the Saturn V rocket that took us to the moon in the 1,000 (pronounced Ten Hundred) most commonly used words in the English language (Thousand is not one of those words). Instead of Saturn V, we get Up Goer Five. The exercise was carried out by Randall Monroe, a physicist turned cartoonist and the creator of the xkcd comic series, a comic with, “themes in compute 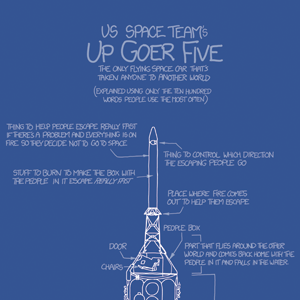 r science, technology, mathematics, science, philosophy, language, pop culture and romance” (according to Wikipedia). Having previously worked for NASA, Randall basically wanted to use the 1,000 most common words to explain the various parts of one of the most complex machines out there. Essentially, an exaggerated form of science communication to non-scientific audiences. And people loved it. He’s actually releasing a book called Thing Explainer (which is funny b/c “Explainer” isn’t actually a word) that has more examples using the criteria for explaining the Saturn V (e.g. Curiosity – I have to say, I love the “Box of Burning Metal”). So why is all this important to [science] communication?

Insert the Up-Goer Five Text Editor.** Inspired by the Up-Goer Five, Theo Sanderson,*** a geneticist at the Sanger Institute, created a text editor whereby individuals can type a message into a box to determine if it meets the 1000-word criteria. It’s really an incredible tool. I remember writing short grant proposals that had to meet a word-limit cutoff. I would do a round of cuts, look over it again, do a round of cuts, look over it again, rinse, repeat. And that was using words in my field. I recently tried to redo the title of my dissertation for a talk I’m giving at the AGU Fall Meeting (purpose of this post) on science communication and it took me >5 tries for a 10-word sentence. It’s not an easy task.

I recognize that the text editor is an extremely exaggerated example of simplified communication, and that we as scientists must strike a balance between maintaining the integrity of our work and not “dumbing” it down, but I do believe the the editor is a useful tool. As someone who is in science communication as a career, I see the editor as a tool that as least gets scientists thinking about other ways to share their science. Should we partake in the exercise and then use that language for our communication? Absolutely not. Is it a helpful thought exercise? You betcha.

Evidently my program thinks so as well. So much so that we have an entire session at the AGU Fall Meeting devoted to giving a talk in Up-Goer Five language. So, if you’re attending by chance, please stop in, it’s going to be a great time!

*Depending on who you ask, acknowledged by Monroe.

**There’s now an Up-Goer Six editor that colors words based on their popularity. Oooooo!